Airbus’s Emirates deal to save the A380 has stalled because of an engine problem: the Rolls-Royce engine is not meeting its performance guarantee!

ANA's flight operations with the A380 are set, as aviation portal AirTransportWorld reports. As already known, the two Airbuses will connect Tokio (NRT) with Honolulu (HNL). The first delivered A380 will conduct its first commercial flight on 29 May 2019 and will take over 3 of the 14 weekly connections between NRT-HNL. With the arrival of the second A380 (first flight set for 1 July 2019), the Airbuses will take over 10 of the 14 weekly flights between the Japanese capital and Hawaii.
Best regards,
Viktor
(Budapest-born, Vienna-raised, Brussels-based)
Top 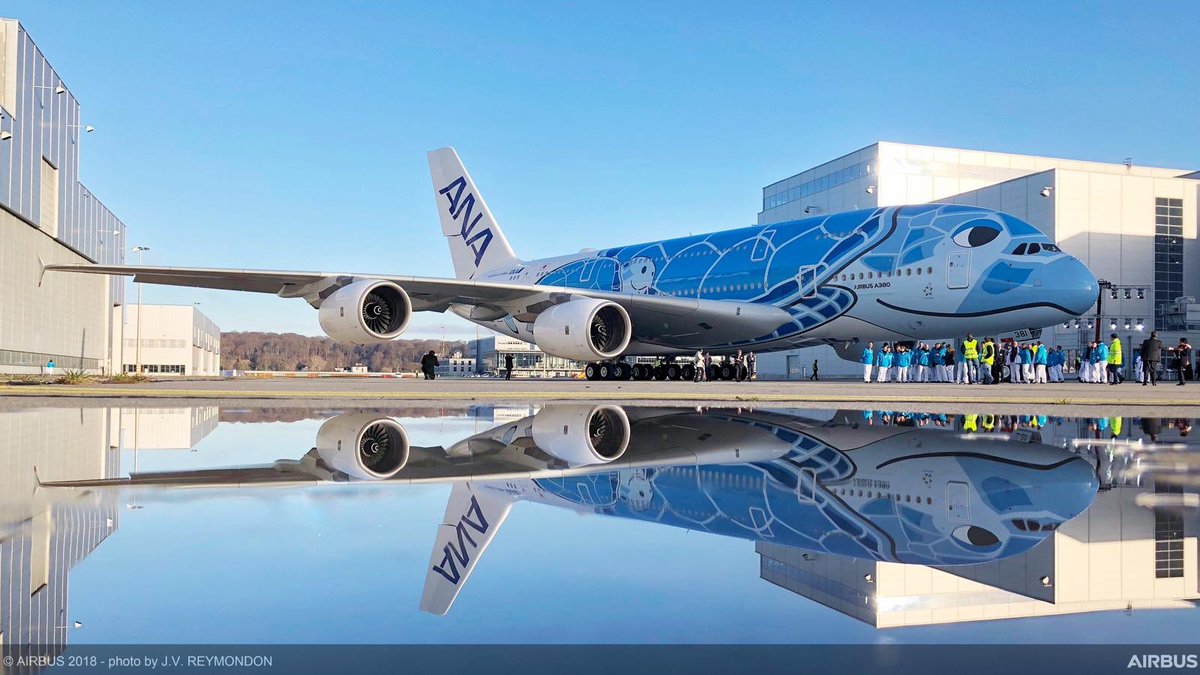 This one sill remain idle for quite some time: ANA All Nippon Airways will start A380 service from Tokyo Narita to Honolulu only on 24 May 2019.
André
ex Sabena #26567
Top

Airbus SE (stock exchange symbol: AIR) confirms it is in discussions with Emirates Airline in relation to its A380 contract. The details of Airbus’ commercial discussions with customers remain confidential.
About Av24.be - Jobs - Hosting packages - Welcome
Top

Qantas has finally cancelled the remaining 8 A380s that it still had on order.

Meaning the world wants more airports, more frequencies, not bigger planes.
Im not sure its good for dubai's mega hub or chineese busiest cities, but its good for everyone else !
My messages reflect my personal opinion which may be different than yours. I beleive a forum is made to create a debate so I encourage people to express themselves, the way they want, with the ideas they want. I expect the same understanding in return.
Top

I know this is an aviation enthusiast site and people prefer to look at the planes rather than the numbers behind them, but in the end Airbus is a commercial company and it is in this business to make money, not emblematic planes.

Airbus CEO Tom Enders is clearly kitchen-sinking costs from problem programs that have dragged on for years as he prepares to leave the company after this year’s annual shareholder meeting, thus cleaning out all his closets.

In addition to terminating the A380 superjumbo at a cost of 463 million euros, Airbus also announced it booked a charge of 436 million euros after reaching an agreement with government customers on revamping the A400M program. It also expensed 123 million euros for compliance issues and 81 million euros in unspecified additional costs.
Adding to the landslide of revelations on Thursday was news that Abu Dhabi-based Etihad Airways will cut an order for the latest A350 wide-bodies by 42 planes.

Nevertheless, Airbus posted an adjusted profit of 5.8 billion euros in 2018 on sales worth 64 billion euros, and raised its dividend payment to 1.65 euros per share.

In his final results statement, Enders, 60, predicted a 15 percent gain in earnings for this year and said he was leaving behind a company that’s on a “solid growth trajectory”. Defense and helicopter arms that have long struggled for sales are now also “in good shape” for Faury and his team to take over, he said.

Airbus shares advanced as much as 5.4 percent when stockmarkets opened with the stream of news from Toulouse this morning, the biggest advance in more than a month. Airbus was up no less than 5.1 percent to 109.74 euros at 9:03 a.m. in Paris, taking gains for the year to about 30 percent even.

The 2019 outlook is above consensus and makes Airbus the “favorite in waiting” among European capital goods stocks for this year, according to many analysts.

As dull as it may be, but a spreadsheet untimately always wins from emotions and sentiments, also in aviation, no matter how much awe, history or love people may feel for a plane, an airline or a route, something I've noticed on many occasions isn't fully grasped by people posting on this site, so although many will say this is a sad day for Airbus, it's actually a very good one, as evidenced by the market reaction to their strategic long term decisions.
Top

Qatar Airways CEO said it will phase out A380 in six years time, the first carrier to do so.
Top

Just back from DXB, this lineup of whale jets on the apron is really an impressive sight that will remain a vibrant memory for a long time. I'm happy I could live this adventute throughout, as an aviation enthusiast I can only feel disappointed from this expected but still painful outcome. Of course the concept from the start was dubious, the plane not versatile enough to gain the needed traction on the market place.
Thank you Airbus this exceptional bird made me dream, and you got a well earned brand recognition in the industry and beyond. This achievement alone is priceless.
Whereas Boeing's dreamliner will never make me dream.. the PR marketing stuff can't beat the real thing.
Top

Germany is in talks with Airbus about €600 million in outstanding loans advanced for development of the A380, which the planemaker now plans to scrap.

Germany will never be the last to want its money back (remember Greece).
André
ex Sabena #26567
Top

German government is looking for ways to recover loans awarded to Airbus for the development of the A380, and is now working with a law firm.
André
ex Sabena #26567
Top

According to this source, British Airways is looking to add up to six second-hand A380s. BA has for the moment 12 of the giant planes, the CEO says that 18 of them would make sense. It is of course also mentioned that they will do it only if an airline is willing to sell their aircraft at the right price. And also the the price for refurbishment may not be too high.

lucas wrote: ↑26 Jun 2019, 14:08 According to this source, British Airways is looking to add up to six second-hand A380s. BA has for the moment 12 of the giant planes, the CEO says that 18 of them would make sense. It is of course also mentioned that they will do it only if an airline is willing to sell their aircraft at the right price. And also the the price for refurbishment may not be too high.

BA has quite an extensive fleet of B747's. Would it make sense to replace some of them with A380's? Is the A380 more efficient?
Top

That is something I suggested months ago on this forum but nobody took the idea seriously!!!!
Hasta la victoria siempre.
Top

According to this source, British Airways is looking to add up to six second-hand A380s.

I wonder will they be taking them from Oneworld partner Qatar Airways, who have said they wish to phase out their A380's?
Top
Post Reply
399 posts