Share your experiences about your latest flights: details and pictures are highly appreciated by our community. How do you rate airlines, in-flight meals, frequent flyer programs, etc... join this forum now!
Post Reply
37 posts

Indeed Andre, the flight will be fun, would have loved to join this one...
But... the main star won't sing... also not for the spectators outside..
Pity, enjoy the flight..
CXB
New types flown 2021 .. //
Top

I can confirm the flight is certainly going to take place and there are still seats available!

Part of the comet may have survived after all, after having lost 3 million tonnes per second under a temperature of 2700 °C... 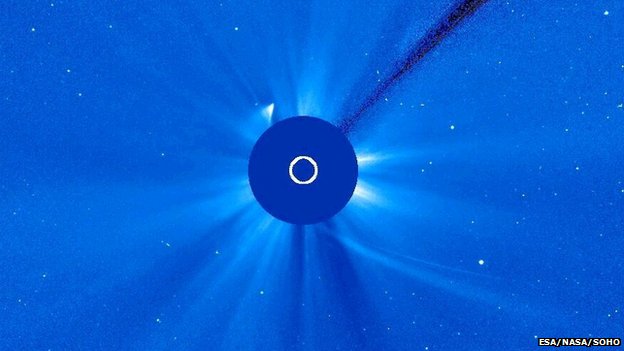 So, the flight might still be very interesting!
André
ex Sabena #26567
Top

The ashes where to thin

They landed at BRU at 08h07 !
Which member will be first to post what they have seen?
Andre?

This was the itinerary:

Flight organised by Urania through The Aviation Factory.

The meeting point was the Thomas Cook registration desk, row 11 at Brussels Airport, at 04:45. A special Swissport check-in desk was reserved for that flight, next to all the Thomas Cook charters check-in. We received a last information sheet from Urania, saying that the brightness of the Ison comet had faded a lot, but with binoculars and a bit of luck we might be able to see (or to guess) something.

We received a very special boarding pass: from BRU to BRU (for me it was a first).

A special boarding pass: from BRU to BRU!

Boarding was at Gate A36. No flight indication whatsoever, neither in the main hall, nor at the gate. A very special flight indeed (or maybe they just don't have BRU in their destination list).

Our group at the gate, ready to board the bus

At 05:30 we were bussed to the aircraft which was at a gate in the B terminal for a fast but orderly boarding through the stairs of the jet bridge. Warm welcome by the two stewards and the sole stewardess. There was ample room for everybody, with about 90 passengers, so that almost everyone could have a free seat next to him.

I had seat 2A without neighbours. I thought "fantastic", but it was too close to the galley where the steward was preparing the meals for the cockpit and the drinks for the passengers, with the light on during the beginning of the flight. Else, the lights were kept off during the whole flight, except take-off and landing. I could alleviate the (small) problem by putting my jacket above me.

We left the gate on time and proceeded quickly to runway 25R, where we took off just behind a JAF 738. Quick ascent above the clouds to FL 390 (by special authorisation of Eurocontrol, otherwise we should have flown at FL330). We flew in direction Amsterdam, which was covered with clouds, but those closed were orange with all the lights of the city. Not very good for observation of the sky. A little further north the clouds disappeared.

The Urania people gave nice explanations about the stars, left and right of the aeroplane. ISON should have appeared over the horizon at 06:40, but by then the first light was already appearing and the comet had lost too much of its brightness to be visible, even with binoculars. I nevertheless learned a lot about the Pleiades, Orion, Sirius, Vega and the other bright stars, the small sickle (crescent) of the moon 36 hours before the new moon, the planets Saturn and Mercury, etc. I also was lucky to see a shooting star.

The moon and Saturn

No night photographs though, I am not equipped to take pictures of a black sky...

Our plane through the night

The plane made several U turns above north-east Netherlands near Groningen, to enable everyone to see both East and West of the sky. And soon it was already time to return, because the sky was becoming clearer by the minute, even though the sun would not appear before landing.

The moon, 36 hours before new moon

Dutch greenhouses lit through the night. For the culture of cannabis?

Our plane before sunrise

High-altitude clouds already in the sunshine, before sunrise

A rare view: Sunlit high-altitude clouds in the distance, seen between two layers of clouds nearby

Hi,
Pity of the lack of comet but seems a nice and special flight anyway!
Aboarding pass BRU-BRU is nicefor tour collection anyway...
They are rare...
Thx for the nice report and the nice pic of Saturn and the moon..
Did you noticed a difference between astro and avgeeks haha
Next a belgian domestic flight

december month of the strange nearby destinations

I forgot to tell:

1. Many passengers, especially children, were more interested in the visit of the cockpit generously offered by the pilot than in the comets, stars and planets...

2. The next big trip organised by Urania will be for the total solar eclipse of 2015. It will be an 80% eclipse in Belgium (at Urania they say Flanders), but a total eclipse in Iceland, to where they will organise a flight.
André
ex Sabena #26567
Top

Thanks for the excellent trip teport Andre! Too bad I couldn't join

(as neither could I witness the first QR B787 arrival at BRU).

Thanks for the additional info regarding Urania trips!

sn26567 wrote:There was ample room for everybody, with about 90 passengers, so that almost everyone could have a free seat next to him.

It would have been impossible to see ISON in the morning of 1 December. This video shows how it "evaporated" the day before (30 November), after passing at the perihelion: