As other members have said before, the limited follow up on this type of news may not justify opening a dedicated thread for each case but “dumping” it in the “Trivia 2016, 2017, 2018, … “ doesn’t seem appropriate and respectful enough either, although I did it myself before.

So I suggest we gather here similar sad announcement of the death of aviators and prominent figures in aviation.

2018, January 5.
John Young, American naval aviator and astronaut died at the age of 87.

John Young served the longest career as NASA astronaut, having flown six missions in space.
He was part of the initial group of astronauts and flew the first manned Gemini mission (Gemini 3) with Gus Grissom in March 1965 and again on Gemini 10 in July 1966 with Michael Collins.

In May 1969 he flew with Tom Stafford and Gene Cernan a rehearsal mission to the moon though it was not intended for the LEM to land. He then finally set foot on the moon (with Charles Duke) during the Apollo 10 mission in April 1972, the one but last landing on the moon.
He then moved on to the Space Shuttle program and flew the STS-1 maiden mission on 12 April 1981 with Bob Crippen. The multiple delays of the mission led Young to joke that “should it have been further delayed you’d have had “Old ‘n Crippled” instead of Young and Crippen".
His last flight was on STS-9 in November 1983, the Shuttle mission carrying the first elements of the Space Lab.
John Young retired from NASA in 2004.

He was a pioneer and a great figure of the space exploration.

Second thought; I should have posted this here.

NASA on Twitter 2018-05-26 :
We're saddened by the passing of astronaut Alan Bean. The fourth person to walk on the Moon, he spent 10+ hours on the lunar surface during Apollo 12. Bean was spacecraft commander of Skylab Mission II & devoted his retirement to painting.

Of the first 60 Astronauts to fly above the 100km limit, 22 are still alive (and 8 died during accidents) giving a "survival rate" that is no so surprising considering the strict selection criteria they went through.
The oldest is Wladimir Shatalov, born Dec 1927, who flew Soyuz 4.
Followed by Anatoly Filipchenko, born Feb 1928, who flew Soyuz 7.
Frank Borman and Jim Lovell, both born in March 1928, are the oldest American astronauts still alive.

A native from Duisburg, Germany, Günter Scherer had devoted his whole life to aviation and flight test. After graduating from RWTH Aachen with a degree in engineering he started his career in 1961 at what was VFW in Bremen at the time. In 1962, Günter Scherer was called onto the joint Franco-German military transport aircraft Transall. As such, he was one of the very first German flight test members to be graduated from the French flight test school EPNER (Ecole du Personnel Navigant d’Essais et de Réception) in 1961.

A convinced European, who believed in European cooperation as key for a successful aerospace industry in Europe, Günter Scherer joined the SNIAS French Aerospace Company, where he participated to the preliminary work for the Airbus aircraft flight tests. He was flight test engineer in the first ever Airbus flight on Oct 28, 1972 when the A300 took off.

In 1977, this allowed to establish the first integrated multinational flight test team, continuing the European integration which he strongly believed in. He was instrumental in the development and flight test of the A300, A310 and subsequently the first Fly by Wire controlled A320. He ended his career in February 1997.

During all his years at Airbus, Günter had been much appreciated by all his colleagues, who valued his human gentleness, directness and respect for others. Günter Scherer will be remembered by the Airbus community as a man of great integrity and a source of inspiration.

“Günter was a pioneer of Airbus, a strong advocate of Franco-German and European cooperation in our industry. He was thus a solid rock in the foundation of Airbus and will be long remembered,” said Tom Enders, CEO of Airbus.

A Ryanair captain, Jouke Schrale, was found dead in his car at Malaga Airport after he failed to report for his flight AGP-CRL on 3 August. Aviation24.be extends its condolences to his family and friends. Blue skies forever, Jake!

sn26567 wrote: ↑06 Aug 2018, 23:24 A Ryanair captain, Jouke Schrale, was found dead in his car at Malaga Airport after he failed to report for his flight AGP-CRL on 3 August. Aviation24.be extends its condolences to his family and friends. Blue skies forever, Jake!

I concur. He was actually a very good friend of mine and a mentor for a long time when he was base captain in CRL and I was the base SEP examiner. RIP Jake, you will be dearly missed

...Rick Searfoss, a former NASA astronaut who launched on three space shuttle missions before serving as a test pilot for a commercial rocket plane (XCOR), has died. He was 62...
https://www.space.com/42062-astronaut-r ... tuary.html
Top

Southwest Airlines founder and industry titan Herb Kelleher has passed away, according to an internal message to employees. It was him who created the low-cost model that inspired all others, including Ryanair as the first one in Europe.
André
ex Sabena #26567
Top

sn26567 wrote: ↑03 Jan 2019, 23:55 Southwest Airlines founder and industry titan Herb Kelleher has passed away, according to an internal message to employees. It was him who created the low-cost model that inspired all others, including Ryanair as the first one in Europe.

sn26567 wrote: ↑03 Jan 2019, 23:55 Southwest Airlines founder and industry titan Herb Kelleher has passed away, according to an internal message to employees. It was him who created the low-cost model that inspired all others, including Ryanair as the first one in Europe. 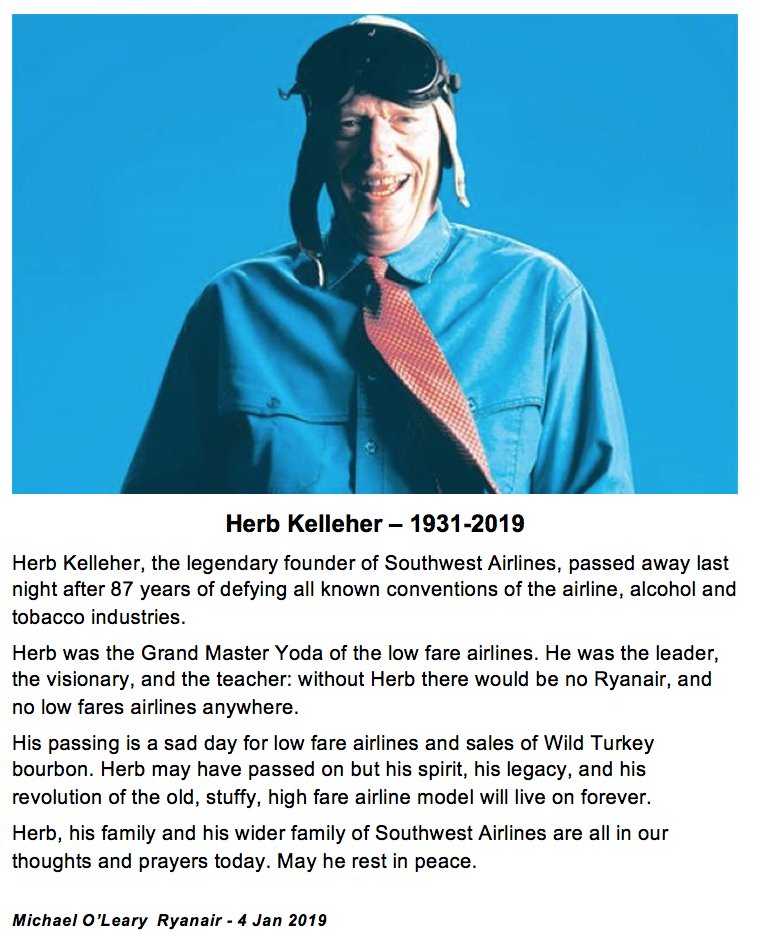 Niki Lauda, ex F1 champion and founder of Lauda Air, Niki and Laudamotion died at the age of 70.

A personal memory from an American friend of mine who used to be spokeswoman of Munich Airport:

So I've read the sad news that Niki Lauda has passed away. I met him once, briefly, at an event we were having together with Austrian Airlines and BMW when I did PR for Munich Airport. At the time, I didn't really know who he was -- I'm not European and I'm not into motorsports, totally different world from mine. I also think this was before he launched Lauda (one of his airlines). So he wasn’t “on my radar,” so to speak. I remember being at this event and seeing a little guy in a baseball cap standing alone at the edge of the crowd of fancy "champagne reception" fake-society people. He was dressed totally normal, didn't seem to fit in with the crowd. I HATE seeing people standing alone at events, and there just seemed to be a huge feeling of sadness coming off of him. Anyway -- I went over to him and as I got closer, noticed that this guy had serious scarring on his face. Thought to myself -- oh great, are these fake people too scared to talk to a guy with a disability? "Hey there," I said. "My name is Erica and I work for the airport!" "I'm Niki," he said, and we shook hands. "Are you enjoying the event?" I asked. He said yes. We talked a bit, NOT EVEN ONCE did he try to pull rank and say "don't you know who I AM?"

Then I had to return to our journalists and my two colleagues, Robert and Edgar, were like "so, Erica, do you know who you were just talking to?" "A guy named Niki? Do you know him?" They busted out laughing. Super super nice and decent guy. RIP, Niki!
André
ex Sabena #26567
Top

Sylvestre Coly Kervyn de Meerendré, 57 years old, and with a lot of experience in aviation as cabin crew member :